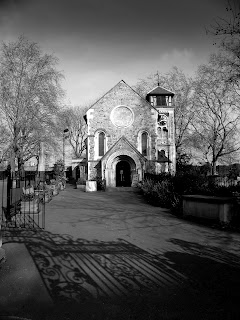 Not far from St Pancras Old Church and the The Hardy Tree, which Jess and I visited almost a year ago, is St Pancras New Church, where I tubed it to (three stops on the Met line) on my lunchtime travels today.       Old and New ﻿ What's so special about St Pancras New Church, you may wonder. Well, there's a lot going on along the Euston Road, where the church is sited. As well the architectural wonder that is the St Pancras Rennaisance Hotel, and The British Library and its sculpture-filled forecourt (see last excursion), there reside four huge, lovely ladies, standing sentinnel over the entrance to the crypt on the North side of the church.    Caryatids on Euston Road These impressive  caryatids by John Charles Felix Rossi are made of terracotta, built up in sections, which you can clearly see (there are four, I think), around cast iron columns. The inspiration for the design of the church is the Ionic Temple of the Erechtheum on the Acropolis.
1 comment
Read more

Newton at the British Library

The British Library is just three tube stops and a short walk from the office.  The walk took me past the wonderful Midland Grand Hotel, a Grade I listed Victorian Gothic masterpiece, designed by Sir George Gilbert Scott , and described by many as the most romantic building in London.  Originally opened as a 300 room hotel in 1873, it was pricey, with expensive fixtures which included a grand staircase, a fireplace in every room and rooms with gold leaf walls.  In 1935 it closed as a hotel. By this time it was too costly to maintain, what with all the servants that were needed to carry the spittoons, chamber pots, tubs and bowls. After falling into a state of disrepair, and being described in an article in The Observer as having "stood, like the weird house of a crazy old lady in some village, unmissable, spooky and inaccessible," it re-opened in 2011 as the St Pancras Renaissance London Hotel .  This was following a £200 million refurbishment, which brought this icon
5 comments
Read more
More posts